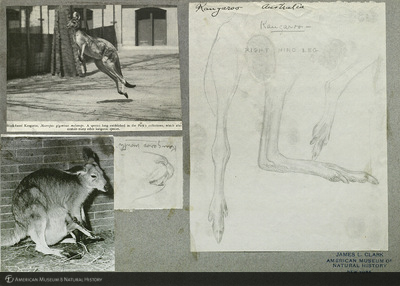 This item contains four images of kangaroos attached to paper backing. Two items are clippings and two are drawings. One clipping shows a kangaroo in motion, hopping forward in a man-made environment consisting of buildings and fencing in the background. The second clipping shows a still-shot of a kangaroo in front of a brick wall carrying a joey in its pouch. One small drawing features a close-up of a kangaroo's mouth and front teeth. The second drawing depicts all four of a kangaroo's limbs with the rest of the body omitted.