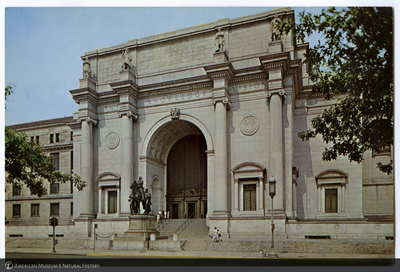 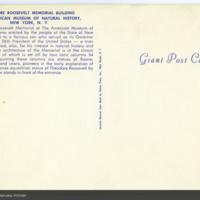 Verso: The Theodore Roosevelt Memorial at the American Museum of Natural History was erected by the people of the State of New York as a tribute to a famous son who served as its Governor and later as the 26th President of the United States - a man who was renowned, also, for his interest in natural history and conservation. The architecture of the Memorial is in the classic style, the facade of which is set off by four iconic columns 54 feet high. Surmounting these columns are statues of Boone, Audubon, Clark, and Lewis, pioneers in the early exploration of our country. A bronze equestrian statue of Theodore Roosevelt by James Earle Fraser stands in front of the entrance. Giant Post Card. The American Museum of Natural History, New York, USA. Series Code: 77746-B. Publisher: Dexter Press, Inc.