Images and copy of letter from Percy E. Hunt to Van Campen Heilner regarding sea curiosities viewed from the Foam, July 21, 1925, Boston 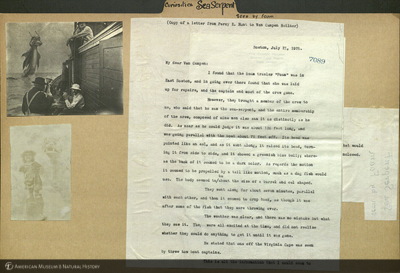 Images and copy of letter from Percy E. Hunt to Van Campen Heilner regarding sea curiosities viewed from the Foam, July 21, 1925, Boston

Curiosities; Sea Serpent seen by Foam; (Copy of a letter from Percy E. Hunt to Van Campen Heilner) Boston, July 21, 1925. My Dear Van Campen: I found that the Beam trawler "Foam" was in East Boston, and in going over there found that she was laid up for repairs, and the captain and most of the crew gone. However, they brought a member of the crew to me, who said that he saw the sea-serpent, and the entire membership of the crew, composed of nine men also saw it as distinctly as he did. As near as he could judge it was about 135 feet long, and was going parallel with the boat about 75 feet off. Its head was pointed like an eel, and as it went along, it raised its head, turning it from side to side, and it showed a greenish blue belly; whereas the back of it seemed to be a dark color. As regards the motion it seemed to be propelled by a tail like motion, such as a dog fish would use. The body seemed to be about the size of a barrel and eel shape. They went along for about seven minutes, parallel with each other, and then it seemed to drop back, as though it was after some of the fish that they were throwing over. The weather was clear, and there was no mistake but what they saw it. They were all excited at the time, and did not realize whether they could do anything to get it until it was gone. He stated that one off the Virginia Cape was seen by three tow boat captains. This is all the information that I could seem to; stamped: "7089"

Information on rights available at the repository