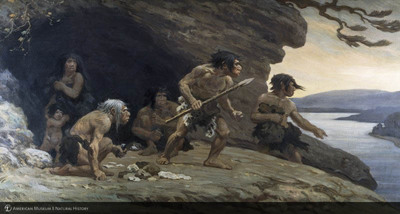 Charles R. Knight, The Flint Workers of the River Vézère, Oil on canvas, 1920. This painting of a Neanderthal family is one of nine large murals produced by the American artist Charles R. Knight (1874-1953) for the Hall of the Age of Man, which opened at the American Museum of Natural History in the early 1920s. Knight creates a scene at Le Moustier cave, in France, about 40,000 years ago. In 1909, Homo neanderthalensis bones were found at the cave along with stone artifacts, which Knight shows here as they might have been used. The young man at right gathers flint, at center, brandishes a flaked spearpoint as he eyes a woolly rhinoceros in the river below. In the years when Knight, under the guidance of Museum director and paleontologist Henry Fairfield Osborn, was preparing this painting, little was known about the daily habits of our extinct relatives. Neanderthals, who lived in Europe between 200,000 and 30,000 years ago, were generally viewed as primitive brutes. Today, however, scientists think that although Neanderthals did not create art or possess language as we know it, they did live in complex social groups, control fire and bury their dead in simple rituals.

AMNH Library authority record: Hall of the Age of Man