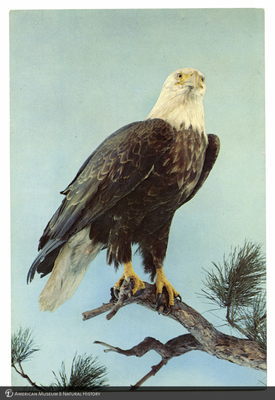 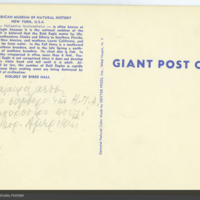 Verso: Bald Eagle - Haliaeetus leucocephalus - is often known as the American Eagle because it is the national emblem of the United States. It is believed that the bald eagle mates for life. It breeds from northeastern Alaska and Siberia, to southern Florida, the gulf coast, New Mexico and southern Lower California, and is seldom found far from water. In the fall there is a southward movement of southern breeders. Its chief diet is fish. In the adult male the wingspread is often more than 6 feet. Frequently the bald eagle is not recognized since it does not develop the characteristic white head and tail until it is an adult. Although protected by law, the number of bald eagles is rapidly diminishing because their nesting areas are being destroyed by the encroachment of civilization. Specimen from the Biology of Birds Hall. Giant Post Card. The American Museum of Natural History, New York, USA.Publisher Identification / Series Code: 76902. Publisher: Dexter Press, Inc.